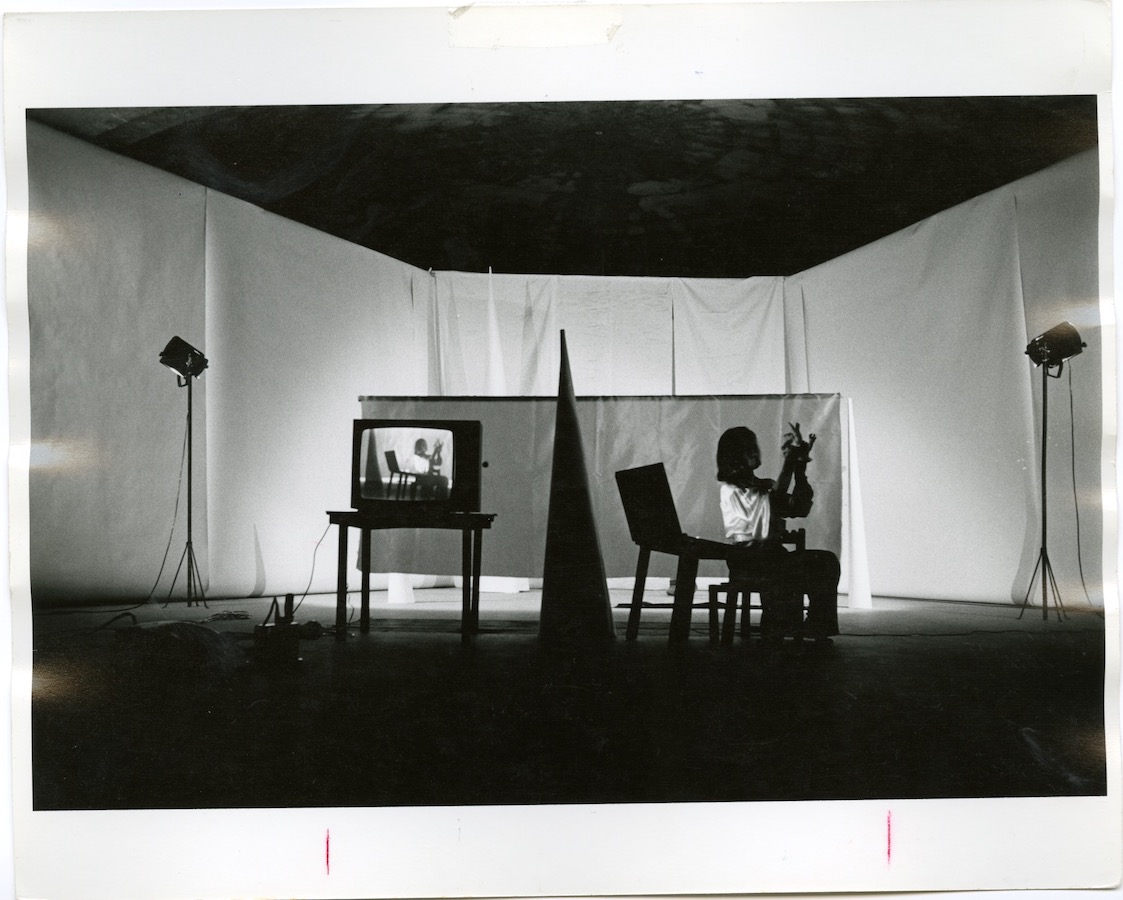 Funnel (1974) is a video performance that was first performed at The Kitchen in New York. It includes the use of a closed-circuit video feed and is another important example of Jonas’s engagement with simultaneous video playback in her performances. Among her props, which include a blue ball, a child’s desk, some white silk, a small metal hoop with colored disks, a white rabbit, and an antique butterfly, Jonas uses a collection of paper cones for the first time. The cones, which Jonas has placed around the stage, become an interactive, sonic device. The artist picks them up and uses them, singing a melody and whispering through different cones, for example. Jonas moves through a series of scripted actions such as sitting at the child’s desk or walking in a straight line from the back of the set towards the spectators while aggressively snapping a leather belt. She combines these with some improvisation done in response to anonymous advice from the audience, relayed by performer Robin Winters, whose voice is projected from behind a paper wall at the back of the set. The set itself is half-lit, with shadows. It is constructed of white paper walls that recede towards the back, forming a shape like a funnel. Over the course of the performance, curtains are opened or removed to reveal three layers of space. In the foreground, at the wide end of the funnel and closest to the audience, there is a shallow space delineated by an opaque demi-curtain hanging from a wooden bar. This where the video monitor is placed, showing close-ups of various actions and drawings, throughout the performance. A large metal hoop is suspended behind the last curtain. The final scene of the performance focuses on this spinning metal hoop, which is seen simultaneously in close up on the video monitor while Reggae music plays. Jonas performed a version of Funnel under the title Tunnel (1974) in a performance organized by Texas Gallery, Houston. In 2019, Jonas developed an installation version of Funnel (1976/2019), which was subsequently acquired by the Walker Art Center, Minneapolis.